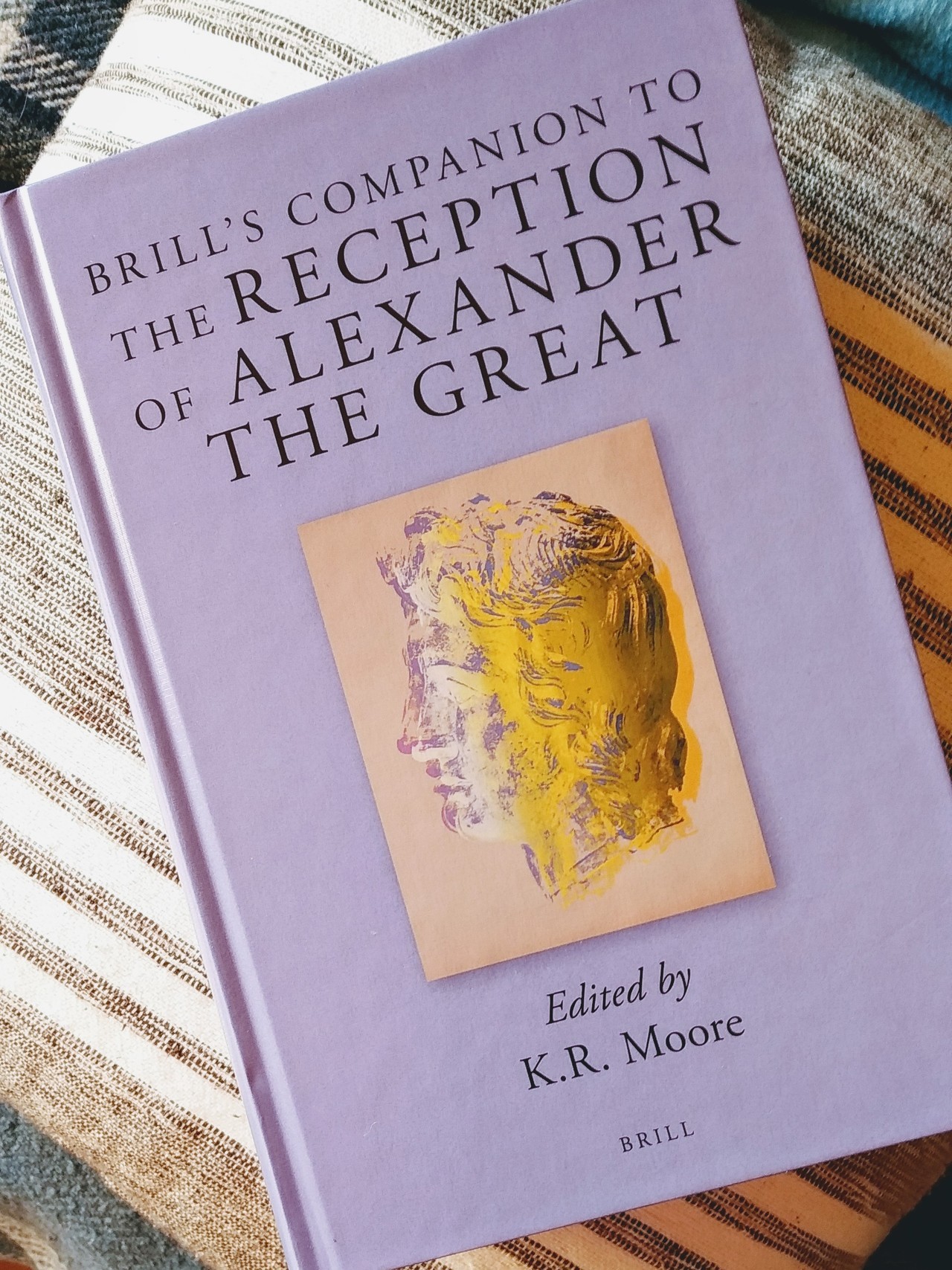 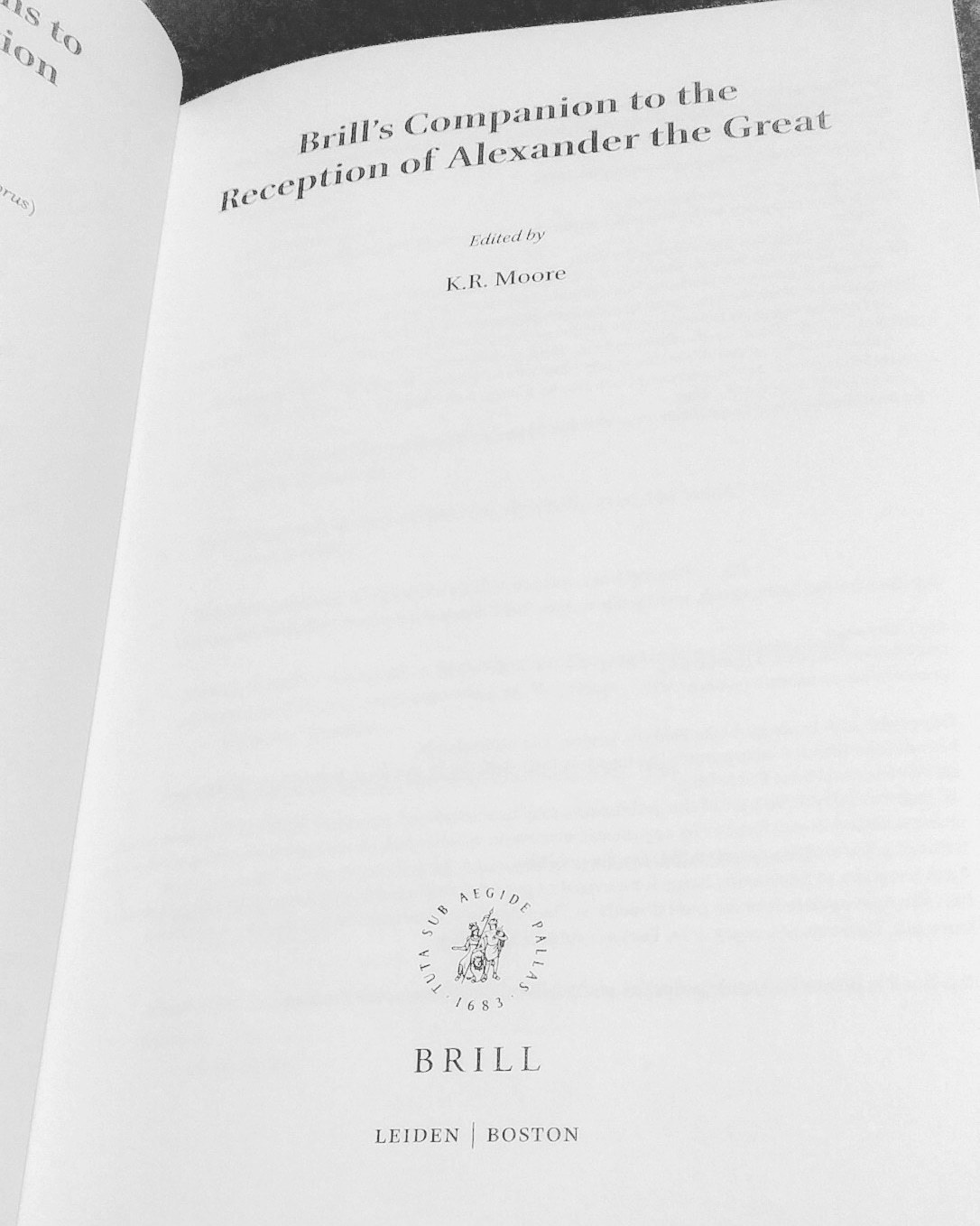 There is still much to be done on Alexander and this Companion cannot hope to amount to the “be all and end all” of the matter.

Alexander the Great is immortal through his constant reinvention and reception by each generation.

His victorious record remains intact, if not unequivocal, despite 2,300+ years of near constant engagement on the battlefield of academia.

Looming large in all of these incidents and their receptions is what I consider to be the overarching debate: whether Alexander the Great was in fact just a ‘Lucky Tyrant’ or, in some sense, a beneficent ‘Civilizer’, a preeminent promoter of the ‘Unity of (Hu)Mankind’. Of course the truth, whatever that is, will always be stranger and more complex.

When St. John Chrysostom, Bishop of Constantinople (A.D. 347-407), asked his flock, “Tell me, where is the tomb (sema) of Alexander? Show it to me and tell me the day on which he died”, his purpose was to underscore the futility of a world which even the greatest of individuals could be lost to history. He was probably certain that no one at that time would be able to answer his question. To ask “Can we know the real Alexander?” is surely begging to be met with a similar response.

The synthesis of this dialectical confrontation can be found after the death of Alexander. According to the epistolography of that time, the dead king has set his own political and moral paradigm, to be imitated by the future leaders and world rulers.

Philip II turned a disunited, weakened, and peripheral Macedonia into the hegemonic power of the Mediterranean world. Without his political achievement, Alexander III’s conquests would not have been possible.

Already in his lifetime, Philip was a celebrity. The new dimension of the empire’s rise and expansion under his reign vaulted him into the public eye. As the political success of Macedonia, with its perceived personal monarchy, was associated primarily with Philip and ascribed to him individually; he was viewed as a new kind of enemy in regard of timing, weapons, tactics and rapid successes. Philip was clearly the man of the hour.

In consequence, Philip was particularly remembered as Alexander’s father, while the memory of his own achievements began to fade. Predominantly, he became a mere foil to Alexander’s superior image as a conqueror. Even the natural hierarchy of father over son was reversed. Philip’s contribution to his son’s famous deeds was mostly acknowledged in passing.

Predominantly, Philip played a minor role as a supporter of Alexander’s ‘greatness’ in their literary life, thus one of his ‘stepping stones’.

No matter what image of Philip occurred, the label of being ‘the father of Alexander the Great’ was imprinted indelibly on the cultural memory.

Alexander’s position as dynastic founder was thus reified through the continuous addition of new links on the family line, embedding and making traditional the ideology that had been established in the dynasty’s earliest generations.

John Holton, The Reception of Alexander in the Ptolemaic Dynasty

The long-lived Roman use of Alexander as a dynastic model, indebted in many ways to Octavian’s action in 30 BC, suggests that although the Ptolemies themselves died out with their last monarch Cleopatra, the mode of the Ptolemaic reception of Alexander continued to live on in the hands of the new Mediterranean superpower.

John Holton, The Reception of Alexander in the Ptolemaic Dynasty

Alexander, as we have him, is mostly a construct of the Roman world and is, therefore, open to continuous reinterpretation.

Shane Wallace, Metalexandron: Receptions of Alexander in the Hellenistic and Roman Worlds

Each city had its own Alexander, which influenced a ruler’s engagement with Alexander’s memory at a local level.

Shane Wallace, Metalexandron: Receptions of Alexander in the Hellenistic and Roman Worlds

Alexander passed on, and words are all that’s left of him now.

While the meaning and location of Rome shifted, Alexander’s identification as a leader of this realm remained. As Rome moved, the memory of the conqueror moved with it.

Nonetheless, it is the failure of Alexander to provide a suitable heir early enough before his death that marked his greatest failure.

Kyle Erickson, Sons of Heracles: Antony and Alexander in the Late Republic

Every historical period builds a personal image of Alexander, useful for propaganda and political purposes.

The early twentieth century Alexander-historian Ulrich Wilcken once wrote that “every student has an Alexander of his own”, which is no less true today than it was when he wrote it. Every approach to Alexander is mired in the experiences and understandings of the person interpreting the source material, causing a near endless number of Alexanders.

Livy, for instance, writes in his account of the Second Punic War of a conversation between Publius Africanus, a diplomat, and Hannibal in which Africanus asked Hannibal whom he thought to be the greatest commander (35.14.6-11). Hannibal answered, “King Alexander of Macedon, who with a small force routed innumerable armies and who travelled the furthest limits, which is above human expectation to see.”

Plutarch’s Alexander is the only world conqueror who has remained “unconquered”.

“Each age makes his own Alexander”.

The image of Alexander was too important to elude Jewish collective memory.

Meir Ben Shahar, Jews, Samaritans and Alexander: Facts and Fictions in Jewish Stories on the Meeting of Alexander and the High Priest

When the early Christian authors wrote about Alexander they referred to one of the most often-cited and iconic figures in Classical literature.

Basil of Caesarea, in his Address to Young Men on the Right Use of Greek Literature, writes about Alexander’s relationship with Darius’ daughters as a positive example for his audience. In Basil, “the conqueror of men” did not what to be a slave to women.

In the Judeo-Christian context the great achievements and popularity of the Macedonian king were subordinated to the Christian project. The Danielic reception of Alexander was praising Christianity and God himself.

An author with a theological education, he felt that Alexander had died in due time: “and thus it was that the most of the evil that Alexander did was interred with his bones, and the good he did lived after him”. This “good” was mental and spiritual evolution: “Hellenism was, in fact, an immense overflow of the spiritual and the mental”. Alexander’s successors, the Diadochi, then acted as “the real apostles of Hellenism”.

“No soldier in history is more indisputably ‘great’ than Alexander, surpassing the majority even of good and eminent generals, as do Napoleon and very few others”. This quotation from a book on Alexander by Andrew R. Burn was much more in line with mainstream views.

He [Ernst Badian on Alexander the Great and the Loneliness of Power] viewed the career of the conqueror as “an almost embarrassingly perfect illustration of the man who conquered the world, only to lose his soul.”

The reception of the classical world is never easy. We fool ourselves if we imagine otherwise. Despite the impassioned claims of many devotees, it is hard to make a case for the intrinsic, transhistorical value of antiquity. Part of the problem with any claim to the timeless value of antiquity is that the aspects of the classical past that we esteem change so dramatically over time. Classics is constantly being reinvented. Each generation rethinks and recalibrates itself against the classical past anew. Each age finds a different character, style, or idea to value. Different figures are emulated and these figures can rise and fall out of favour with rapidity.

Already a legend in his own time, Alexander the Great’s campaigns extended over an estimated 35,000 kilometres, traversed throughout a ten-year period, stretching across territory from the Balkans down to Egypt and all the way to modern-day Pakistan.

Alexander, Thais, and Persepolis have endured as powerful symbols of their contemporary milieu, though the precise meaning of these symbols has always been dictated more by the ideology and interests of later observers than by whatever their historical character may have been.

Alex McAuley, The Great Misstep: Alexander the Great, Thais, and the Destruction of Persepolis

He [Alexander] chose to focus outward from Afghanistan not inward, as many would-be conquerors have failed to do in the millennia after his conquests.

Yet Alexander has never suffered the sort of damnatio memoriae that had toppled monuments to other world conquerors, while new monuments continue to be erected.

Ada Cohen, The Artist as Art Historian: Some Modern Works on Alexander

“Now, any part of the world that did not see Alexander remained without sunlight.”

Ada Cohen, The Artist as Art Historian: Some Modern Works on Alexander

“Oh Alexander, with light you adorned the world.”

Alexander the Great is the most widely known secular historical figure in Western vulture today. Most people know of him or his story.

“Nobody can consider his condition in life superior to yours.”

Quintus Curtius Rufus – Alexandra F. Morris, The Conscience of the King: Alexander the Great and the Ancient Disabled

Miles [Segregated We Stand? The Mutilated Greeks’ Debate at Persepolis, 330 BC] correctly recognizes that this is the first historically documented case of the disabled being able to decide things about their futures themselves, and actually even being asked for their opinion on matters. This shows that Alexander the Great could be a compassionate, just ruler, who was ahead of his time in that regard.

While not a perfect human being, Alexander the Great was ahead of his time in his treatment of those who were disabled and deserves to be recognized for this.

I’m Elena and you’re on Alessandro III di Macedonia, website-blog dedicated to Alexander the Great and Hellenism. You will find all kinds of news and reviews and you will always be updated on the latest news!  Thank you!

Collaboro con – I collaborate with: LINK